The vision of KUSCO is “Advancement of the S&T collaborations between Korea and the U.S.”
To realize its vision, KUSCO pursues the mission of becoming a premium center for S&T cooperation and Exchanges by pursuing three goals as follows:

To strengthen S&T cooperation portfolio between Korea and the U.S.
To broaden global exchange programs
To support and leverage Korean-American scientists and engineers.

KUSCO enhances cooperative efforts in science and technology between Korea and the United States and supports mutual cooperation and joint programs between two nations and examine S&T issues related to bilateral U.S.-Korea relationships as well. The center also seeks to assist Korean-American scientists, engineers and young students in developing and maintaining professional networks addressing matters of scientific and technical interest in the U.S. 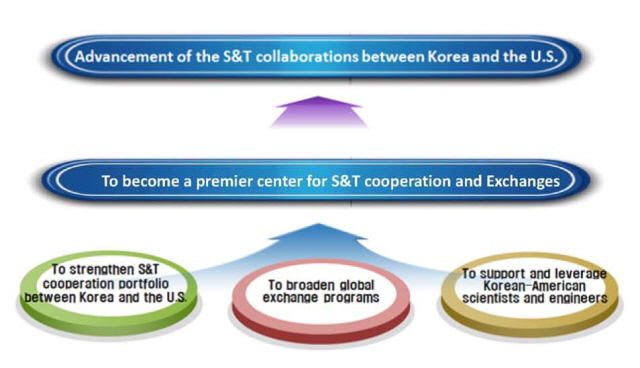 Enhance scientific and technological development of both Korea and the U.S.

Support mutual cooperation and initiate joint programs with U.S. and Korean scientific and engineering societies, academic universities, and other institutions

Examine, assess and publicize scientific and technological developments in Korea and the U.S., particularly the especially collaborative efforts of scientists and engineers in the two countries